From October 3-7, the Executive Board Secretariat and WFP Independent Oversight Advisory Committee held its regular meeting in Nairobi and visited WFP operations in Kenya.

In October 2022, the 160th WFP Independent Oversight Advisory Committee (IOAC) which advises the Executive Board and the Executive Director was hosted for the first time and in hybrid mode in Nairobi, Kenya, by the Regional Bureau for Eastern Africa, giving it the chance to have firsthand experience of WFP operations. After holding a number of its regular agenda items virtually, the field visit focused on Refugee Camps (Dadaab), Crisis Response (ongoing drought response in arid and semi-arid counties in Kenya: Wajir), Resilience (Wajir), School feeding (Dadaab), Nutrition (Wajir and Dadaab), Government Capacity (Wajir), and Innovations (Urban centres – Kibera).   This gave members the chance to have direct exposure to enterprise risk management, internal controls, beneficiary identity management, cash-based transfers, partnerships with Government and NGOs in the field.

Here are some of the trip highlights:

In Dadaab, IOAC members observed the Cash Based Transfer (Bamba Chakula) market activity at the Ifo Refugee camp, which is part of a large UNHCR-managed refugee complex of five camps (covering an area of 50 sq km). The refugees live in enclosed camps with restricted movement and are not allowed to work for pay outside the camps. Almost all refugees rely solely on WFP’s food for survival. WFP provides refugees living in Kenyan camps with unconditional food and nutrition assistance through cash and food transfers.
Members spoke with beneficiaries who saw their lives transformed not only by the ability to buy food, but also to start businesses or pay school fees. Transfers are increasing business opportunities and boosting local economies, benefiting both refugees and the surrounding communities.
Alongside WFP, the Kenyan Government is developing its own cash transfer platform, which is at an advanced stage. WFP helped implement beneficiary feedback mechanisms such as a toll-free call centre, which helps maintain transparency and accountability in the delivery process.

The visit to Ifo Hormud Primary school started with the children’s warm welcome and enthusiasm where the Committee got to see a WFP School Meals Programme in action. With 2,044 refugee students, of which 744 are girls, the objective of the school meals programme is to boost enrollment, attendance, and retention of pupils in primary schools, while serving as an important safety net function by improving the food security of schoolchildren.
During the visit, many students shared their aspirations and dreams with the members, among them there was one very young student who said he wants to be a doctor. For him, the school is a place where he can meet his food and nutritional needs while getting an education, as well opportunities for the future, such as getting a scholarship to an international university.
The Committee warmly appreciated the management and opportunities provided by the school in particular its inclusive approach, especially toward students with disabilities, providing a protective and nurturing environment for the children.

Malnutrition remains unacceptably high in Kenya, where 29% of children in rural areas and 20% of those living in cities are stunted.
To observe the impact of malnourished refugees, the IOAC members visited the Nutrition Kenya Red Cross Stabilization center. Here patients are provided with free health services focusing on the prevention and treatment of malnutrition. The activities include provision of therapeutic nutritious commodities and Social and Behavior Change communication (SBCC) for the prevention and treatment of malnutrition among children 6-59 months, pregnant and lactating women, and persons living with HIV/TB. Support is implemented through a tripartite agreement between WFP, UNHCR and Partners (International Rescue Committee (IRC), Medecins Sans Frontieres (MSF) and Kenya Red Cross Society (KRCS).

The visit continued at the IFO Food Distribution Centre to see the general food distribution process, which provides refugees access to nutritious food and meals through a combination of in-kind and cash transfers. From September 2022, the food basket has been increased from 52 percent to 80 percent of the minimum expenditure basket and the CBT value has been increased from KES 600 to KES 850 thanks to donors.

Here, the Committee noted how collaboration and partnership in the field are crucial to enable smooth and safe implementation of the GFD. Some partners include Cooperative for Assistance and Relief Everywhere (CARE), World Vision International (WVI), and refugees themselves, who are involved in the process. IOAC members had the chance to talk to one of the community-appointed leaders in charge of controls, who plays a key role in the distribution process, helping WFP identify those most in need and provide a general overview of the refugee situation, and ensuring accountability and equity in the distribution process. Due to funding shortages, drought, and security issues, he said that it is critical to ensure that food is distributed to those most in need. The strong collaboration between community leaders and WFP is highly appreciated by the community. Referring to the Head of Office Dadaab, Sarah Borchers, the community leader emphasized that “Sarah is part of us”.

Located in the northeastern region of the country, the IOAC members visited Wajir on the fourth day of their field visit and met with the Governor of Wajir and other County Government officials, among whom Mr. Marwa, Principal Secretary, State Department for Social Protection, senior Citizens Affairs and Special Programmes.

Here, the Committee witnessed the cumulative impact of four consecutive poor rainy seasons, which has resulted in a critical food security situation across much of the Arid and Semi-Arid Lands (ASAL) region of Kenya, including Wajir among the most severely affected. Insufficient and unpredictable rainfall and recurring droughts have caused the disruption of crops – 95 percent of which are rain-fed – the erosion of soils and cumulative losses of livestock deaths. In addition, the global food crisis is adding to poor food production. Annual food inflation stands at 15 percent, while prices of staple foods such as dry white corn and beans increased by 79 and 29 percent respectively between January and August 2022.

Speaking to the IOAC Committee, the County thanked them for their visit to the County and acknowledged the close long-term collaboration between the Wajir County government and WFP, referring to it as "inseparable." WFP collaborates with County governments to support communities in the ASALs to build climate-resilient livelihoods, mitigate the effects of drought and other climate shocks, and to manage, reduce and adapt to climate-related risks. Investments include climate resilient infrastructure, the introduction of drought-tolerant and nutrient-dense crops, livelihoods diversification focusing on women and youth, promotion of conservation agriculture, and risk management through microinsurance and other financial inclusion schemes such as community-based saving and loan associations.

The County congratulated WFP on winning the prestigious Nobel Peace Prize in 2020. "This award is for all of us," the Wajir Governor proudly noted.

The County also stressed that more needs to be done. The number of families receiving support from WFP is not enough, and difficult choices must often be made that result in reducing the number of beneficiaries. Livestock diseases remain a major threat to livelihoods. The County appealed for concerted efforts in disease control including heightened surveillance, ring vaccinations, treatments and parasite control.

The Committee continued its visit to Barwaqo Health Facility, supported by WFP with specialized nutritious foods - Ready-to-Use Supplementary Food (RUSF) and Corn-Soya Blend (CSB++) - for the Integrated Management of Acute Malnutrition (IMAM) for children under 5 years and Pregnant & Lactating Women; Wagalla, one of the sites in Wajir West targeted by WFP under the drought response cash transfer programme, and where IOAC members strongly appreciated the women's direct testimony about their strong preference for cash as opposed to in-kind food, as it provides privacy and choice; and Sundus farm, supported by WFP providing shade netting (with drip irrigation), adopting climate-smart technologies, and equipping and solarizing shallow wells to increase production and reduce costs.

EMPACT tackles youth unemployment by providing digital skills and access to the digital economy to young refugeed and disadvantaged youth. In partnership with leading tech firms like Fiverr and Pluralsight, the project connects trainees with online work opportunities.

Set up at Olympic High School, H2Grow uses hydroponic farming, a type of horticulture that consumes up to 90 percent less water and requires 75 percent less space than conventional growing methods. This is very effective in urban settlements such as Kibera, where land and water are scarce. In addition, this style of farming allows for year-round food production, enabling not only Olympic High School but also other nearby schools and the Kibera community to have year-round access to healthy agricultural products. More importantly, H2Grow is creating a financially sustainable path to scale up hydroponic farming in urban food production using asset-based loans.

The visit was immensely helpful to IOAC members in providing context and first-hand experience in their advisory role. They commented specifically on the dedication and commitment of WFP staff, particularly those working in remote and isolated duty stations.   They will provide a read-out of their field visit findings to the Executive Board Bureau at their next meeting in November. 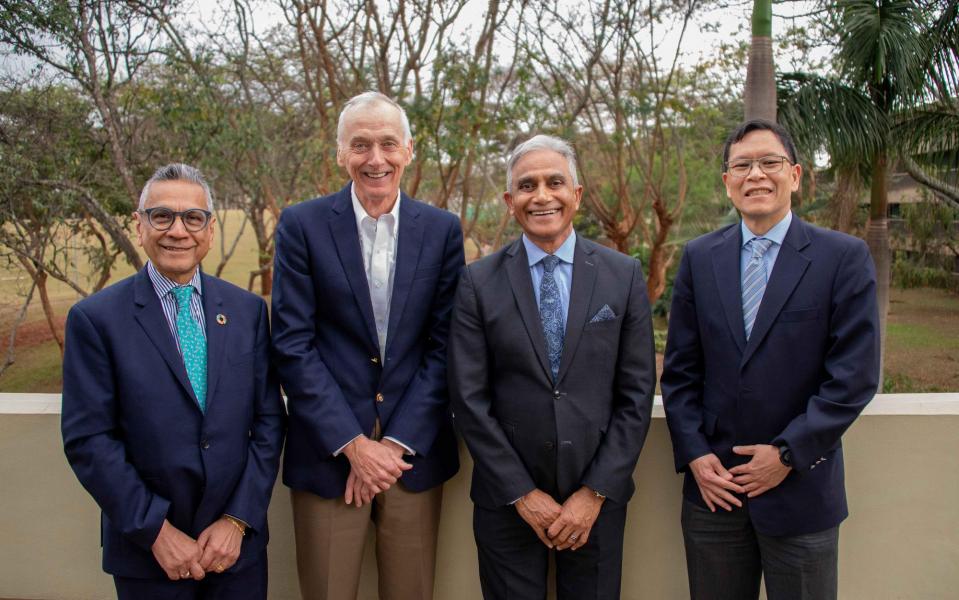 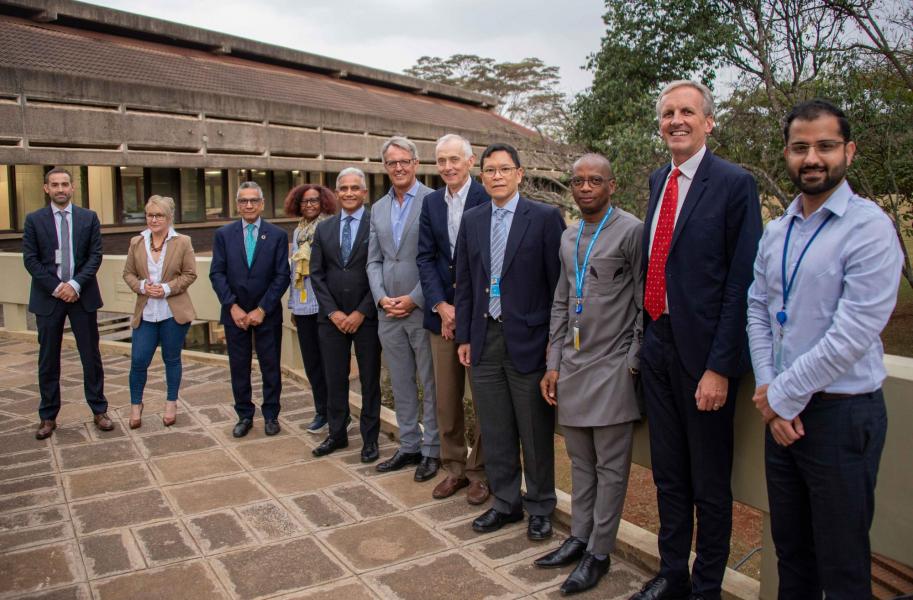 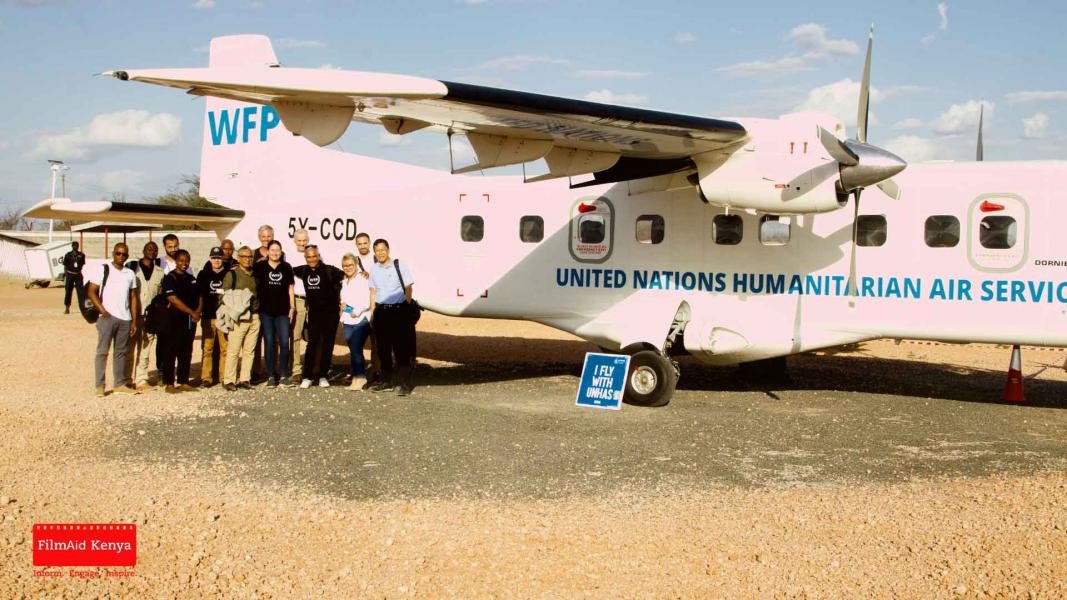 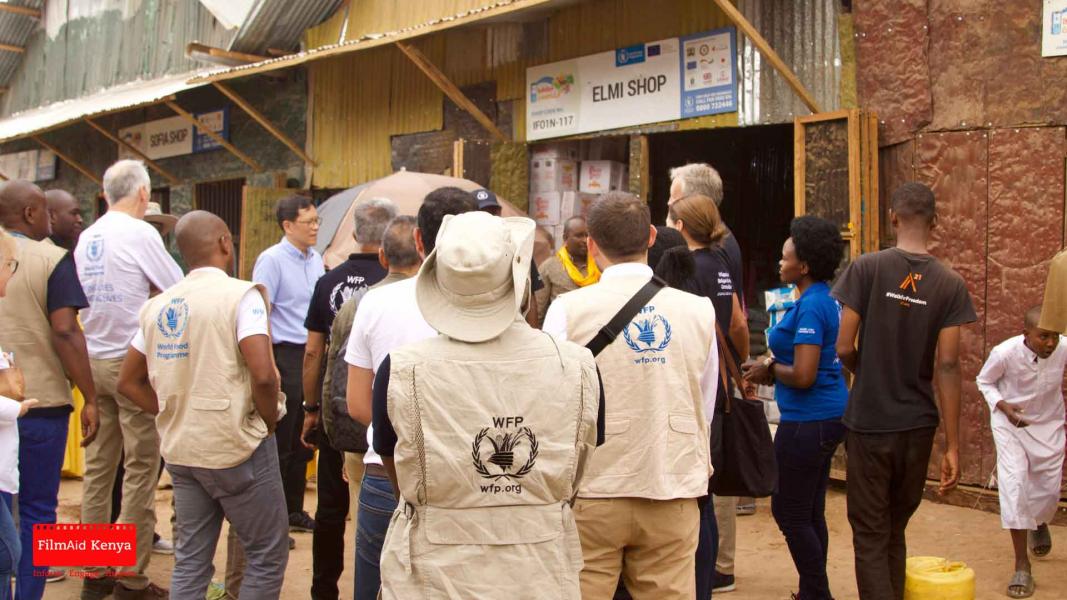 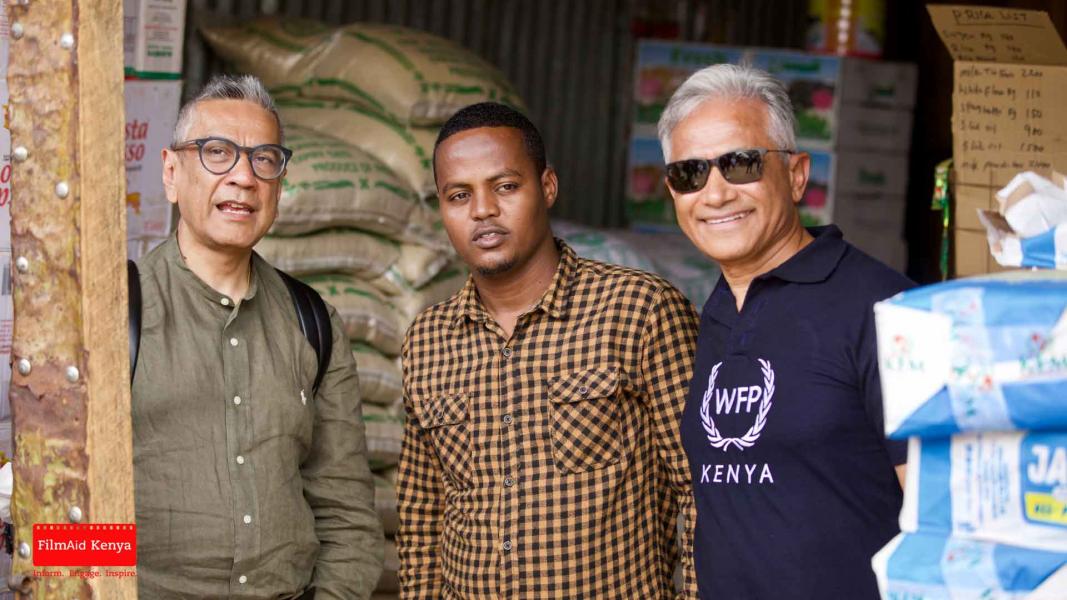 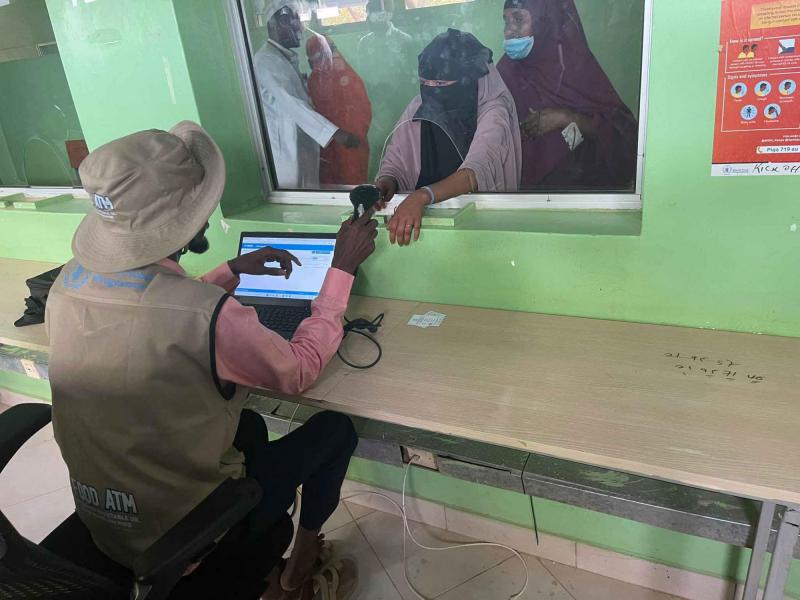 Through electronic cards, known as SCOPE cards, WFP is providing both cash and voucher assistance to people in need, allowing them to choose and buy their own food from local shops across the camp. 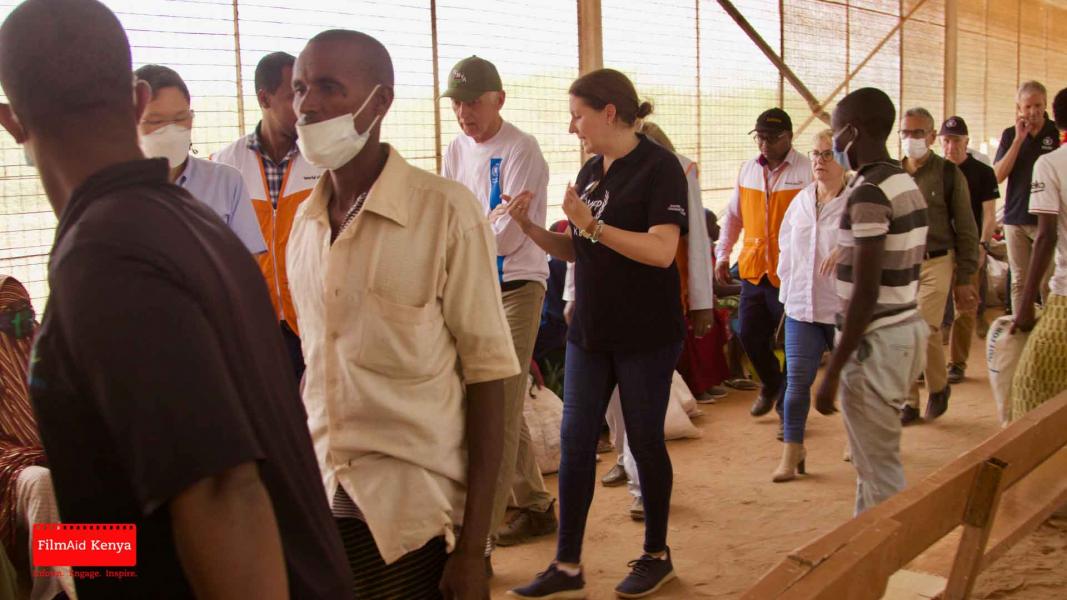 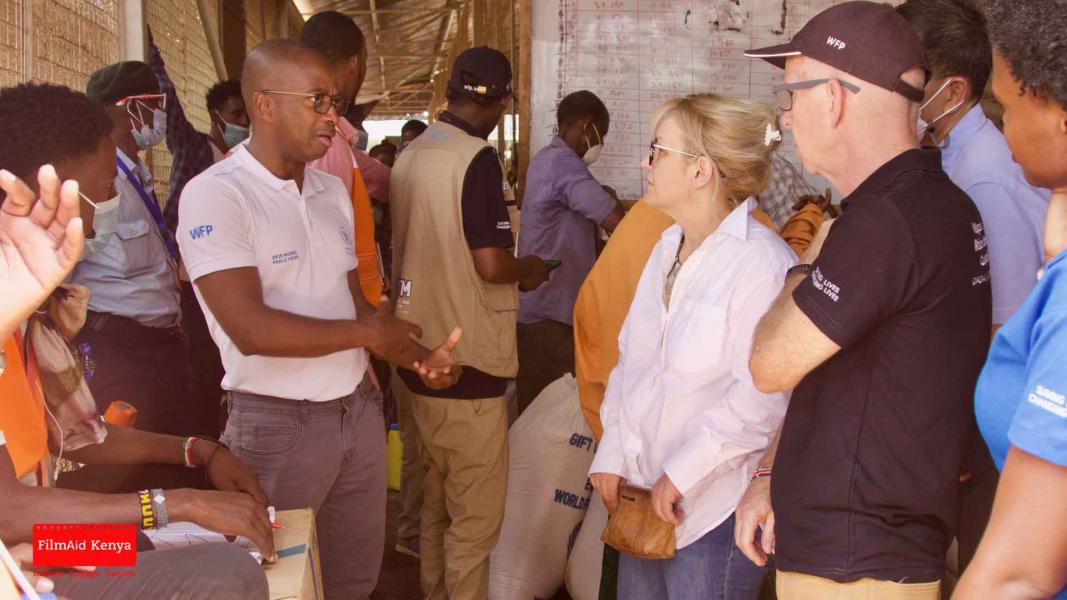 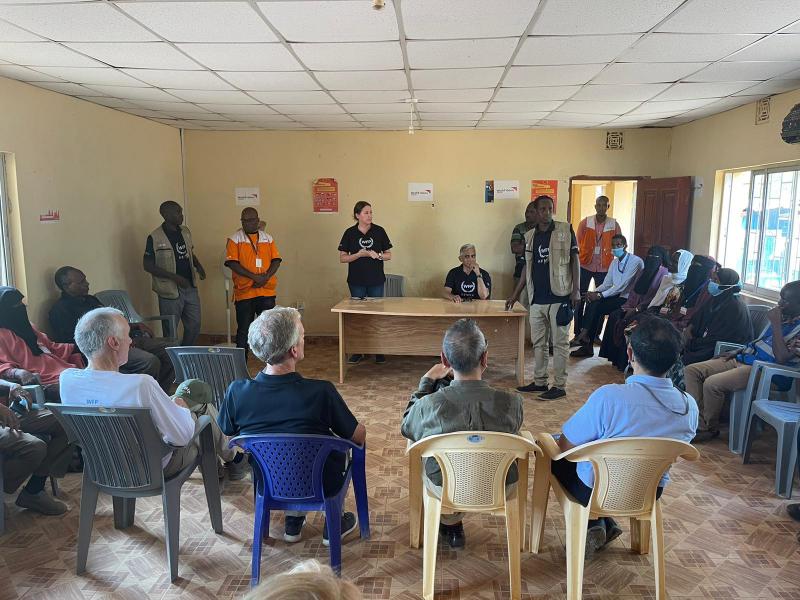 The spirit of cooperation and gratitude between the local community and WFP, in this photo represented by the Head of Office Dadaab, Sarah Borchers. Photo: WFP/Zaid Abbasi 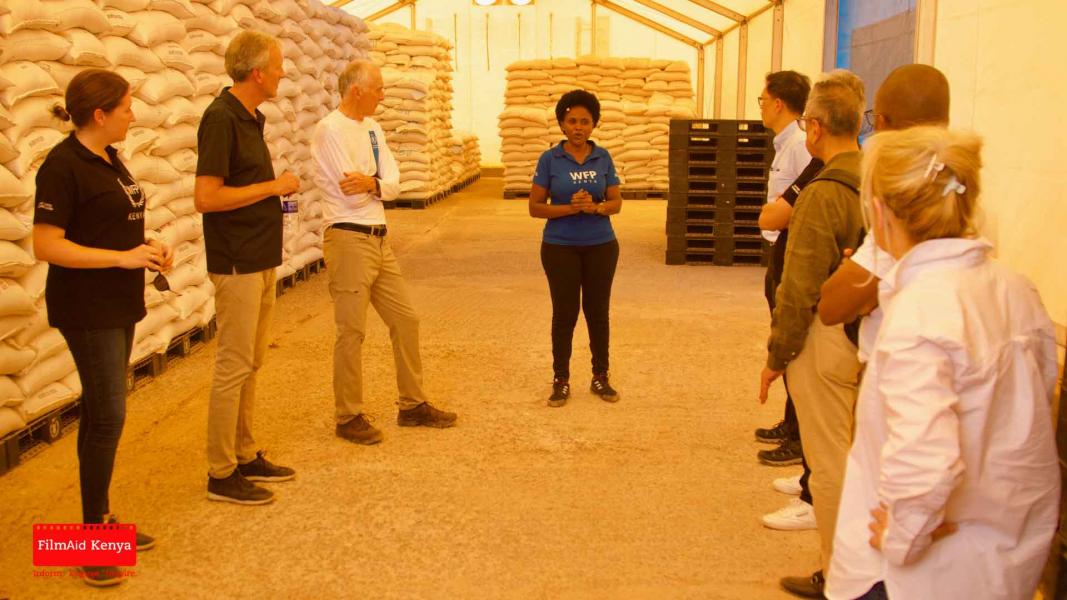 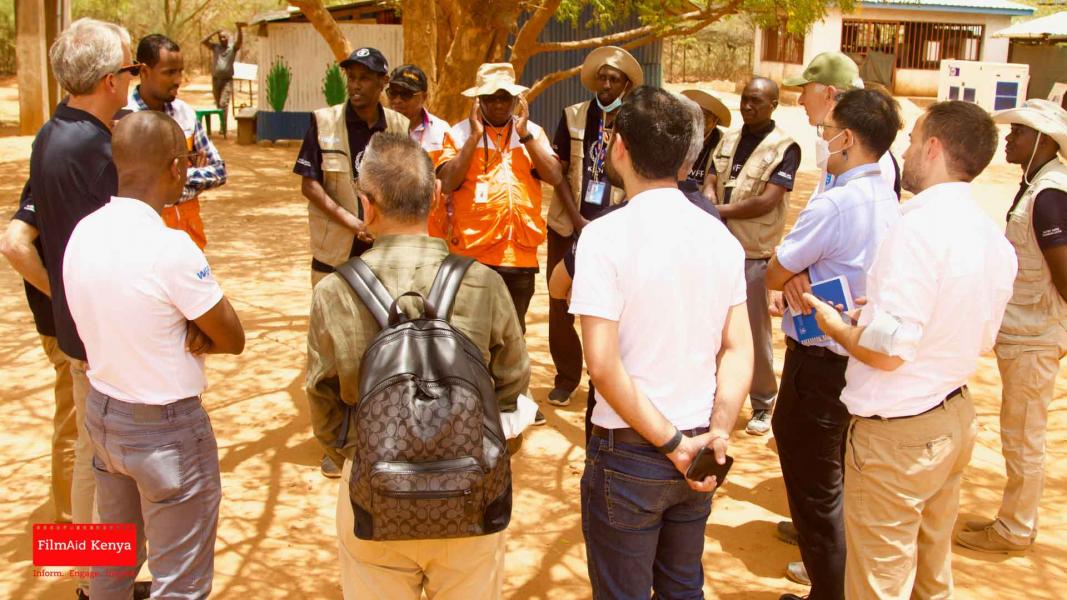 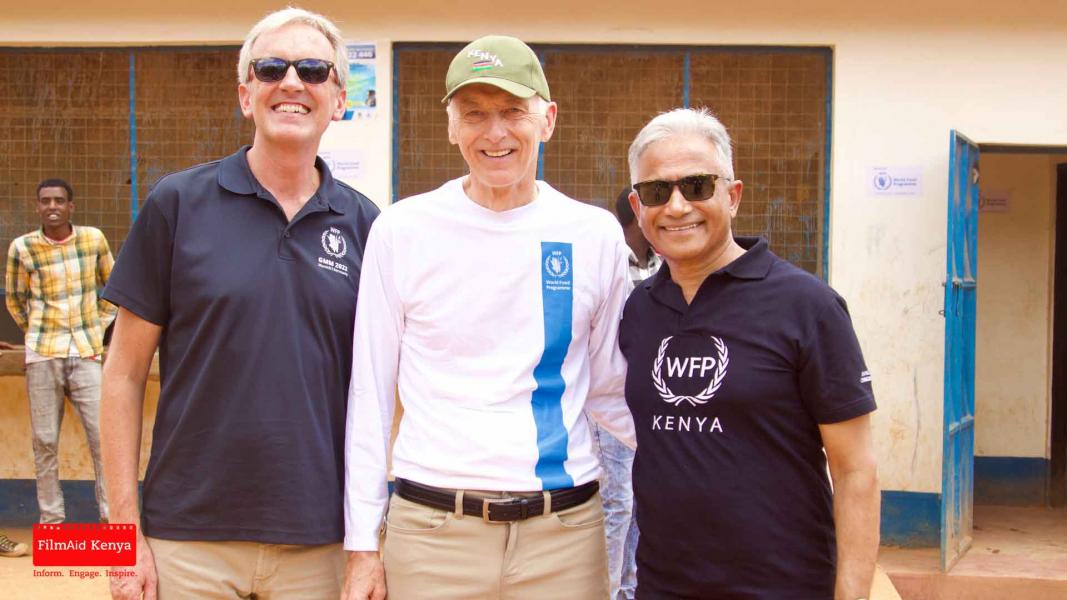 IOAC members with WFP Secretary to the EB in the primary school in Dadaab. Photo: FilmAid Kenya 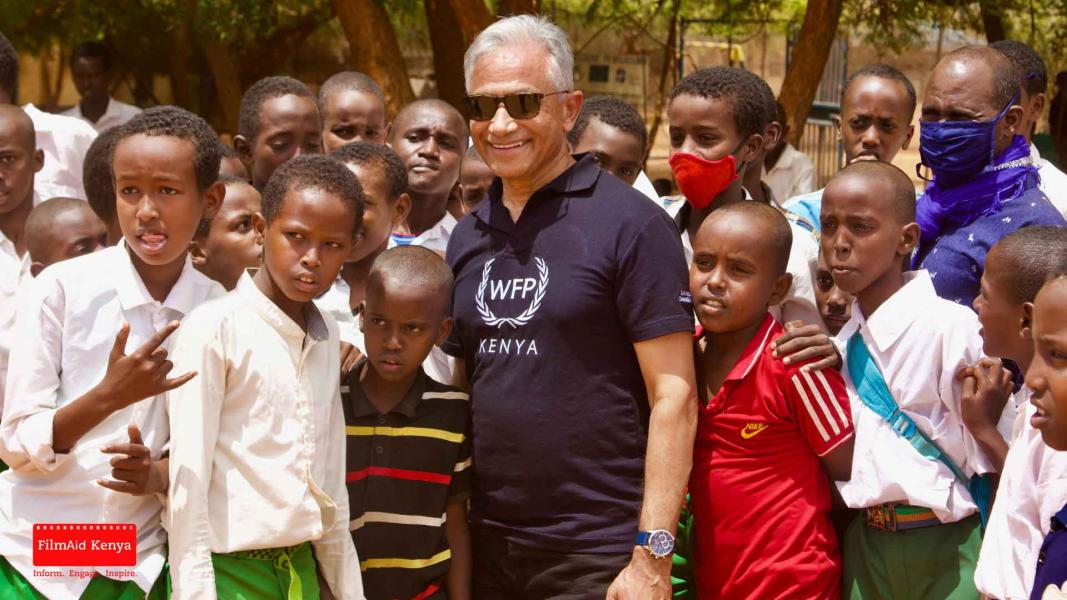 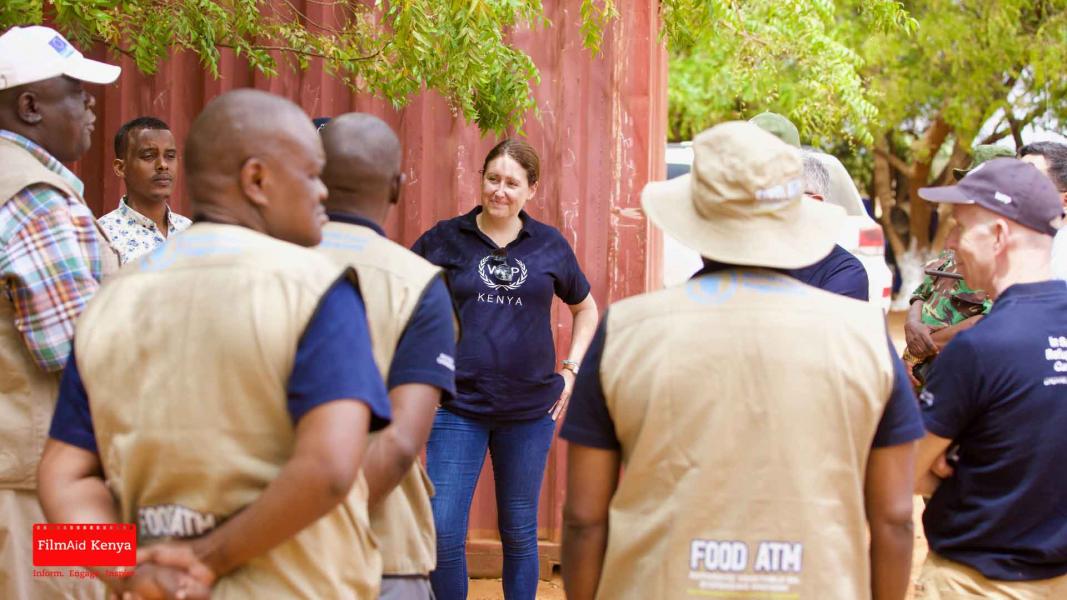 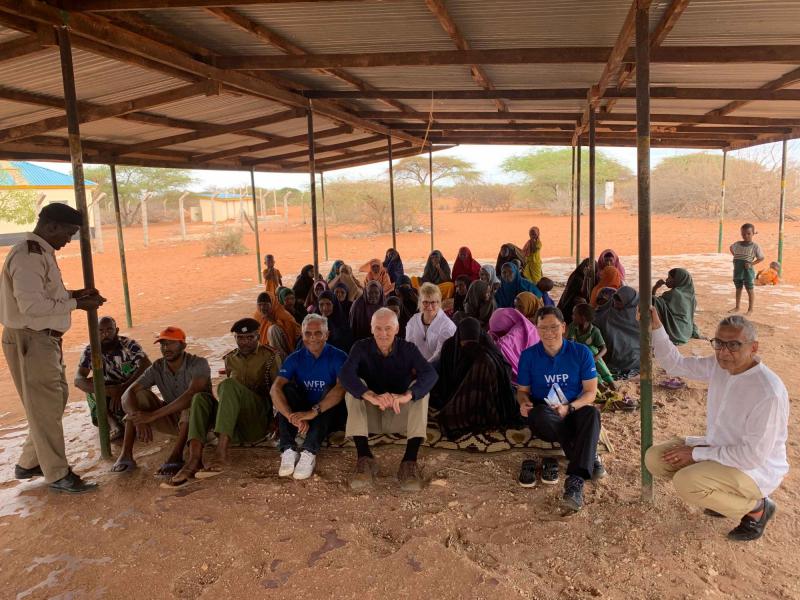 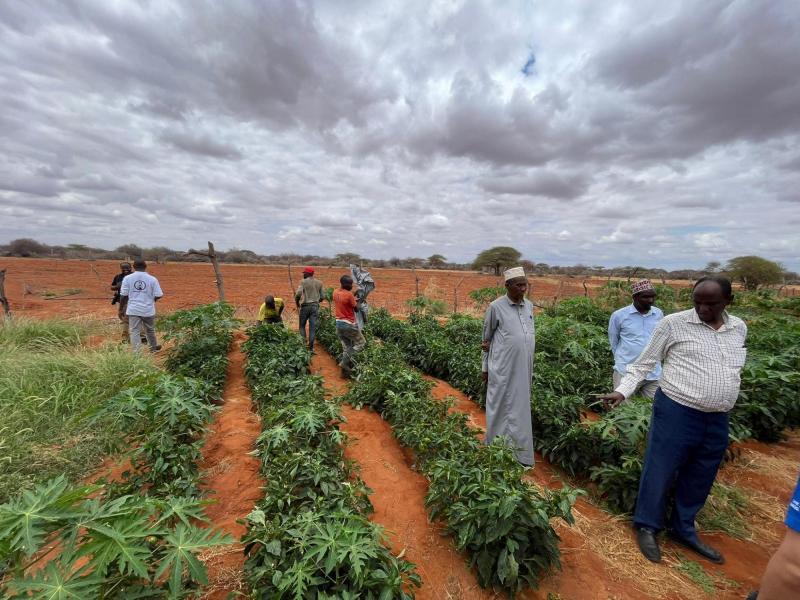 A view of the Sundus farm. Photo: WFP/Zaid Abbasi 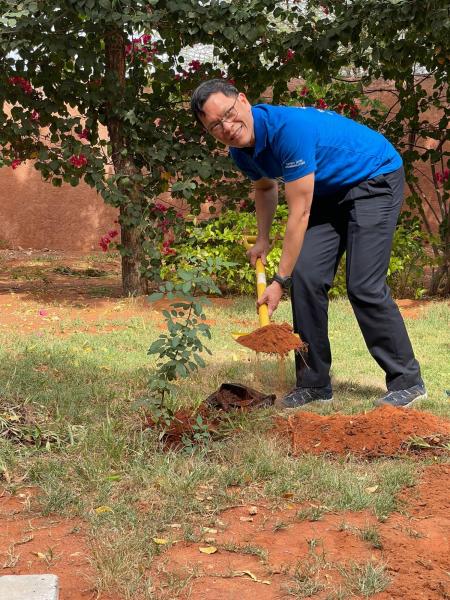 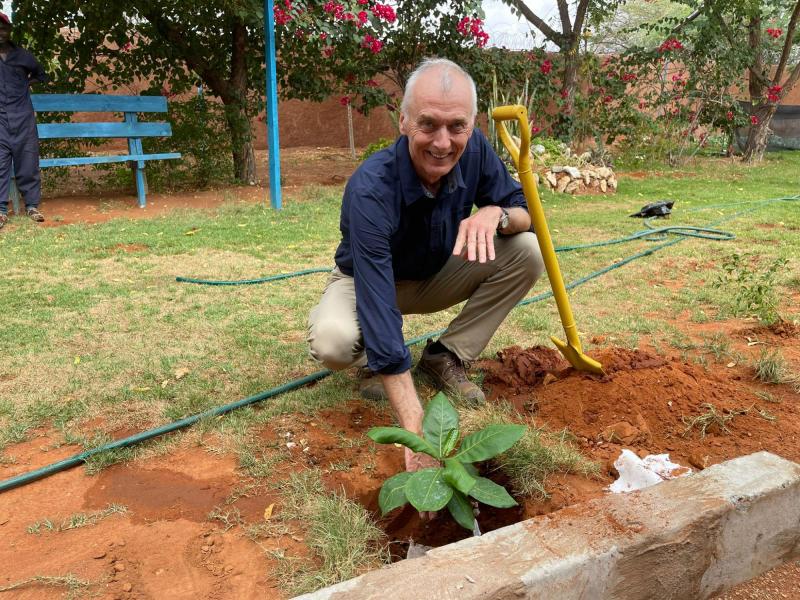 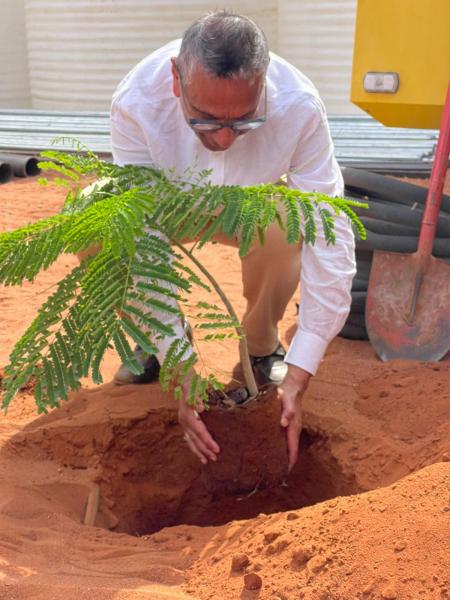 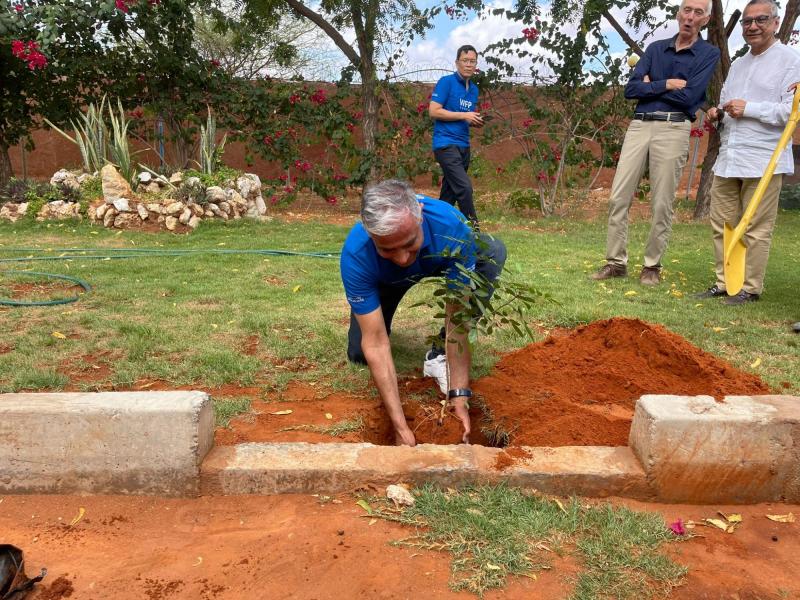 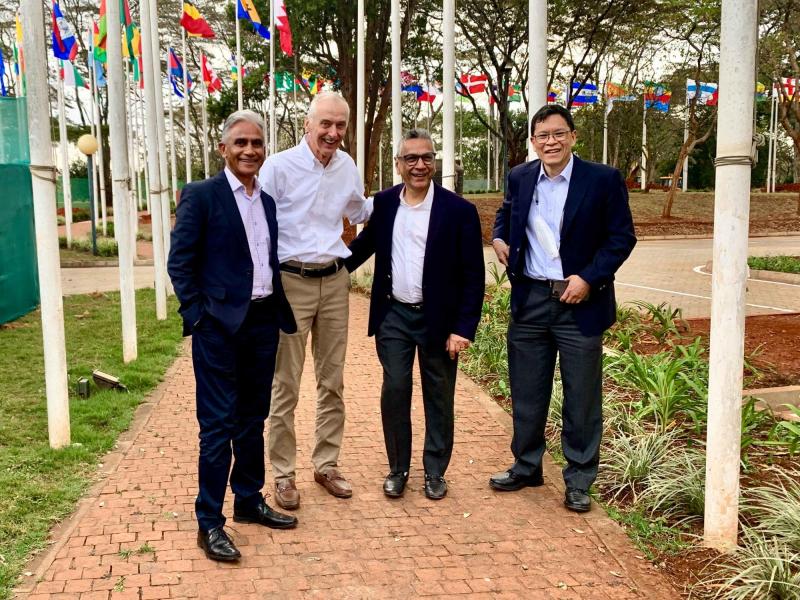